About the Baysville Riverfront Group

The vision of the newly-formed Riverfront Group was to put in place the infrastructure that would provide access to the town of Baysville from the water. A large number of Baysville residents volunteered to work along side the Riverfront Group as the docks and retaining wall were constructed. 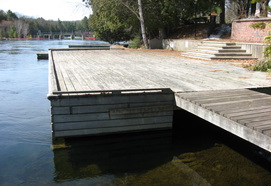 The Main Dock and Extensions

Another objective was to enhance the aesthetics along the riverfront. This was accomplished by putting in a variety of gardens. The Group provides the resources to maintain these gardens on a yearly basis.

In 2010 the Riverfront Group helped to spearhead an initiative that resulted in the construction of the bandshell and the public washrooms through a G8 grant. The gardens around these two structures are also maintained by the Group.

For these projects, as well as others, the missing ingredient was the monies to fund them. Hence a variety of fundraising strategies were put in place over time. The first major activity was the Surf & Turf Dinner with a silent auction - the first one being held in 2000. Then a year later the Riverfront Group took over the Arts & Crafts Festival from Dick Robinson. It was about this time that the Group's leadership shifted to Bob and Cathy Racine. In 2004, the Antique Boat and Car Show was launched. It was and still is great to see the abundance of summer activities in Baysville, not forgetting that the Walkabout, organized by the Baysville Community Group, is a popular venue as well.

The Riverfront Group has supported the community of Baysville and the Township of Lake of Bays in a variety of ways. Substantial donations have assisted the Curling Club, the Horticultural Society, Fire Station 40, the Community Centre, the After School Programs, the Library, the Anglican Church food bank, children's swimming lessons, as well as individual families. The Group also offers bursaries for students entering a post-secondary program.

Volunteers are the backbone of any not-for-profit organization. In order to continue offering the current level of support, the addition of new members is essential. Show your interest by contacting Cathy Vanclieaf at 705-787-6391.

These smaller docks with floating sections were added after the Millenium Project was completed.

When the steps and the walkway up to Gristmill Park were completed, the access to the town of Baysville from the south branch of the Muskoka River was in place and their vision was realized.

The projects that followed focused on the brick walkways that are found along the riverfront in Gristmill Park, Robertson Parkette and down below the dam where the parking lot is located.

The lookout was integrated into the walkway by the dam, as was the gazebo pictured on our Welcome page.

In the following years the brick walkway along Dickie Street was completed along with the entrances to the cemetaries.